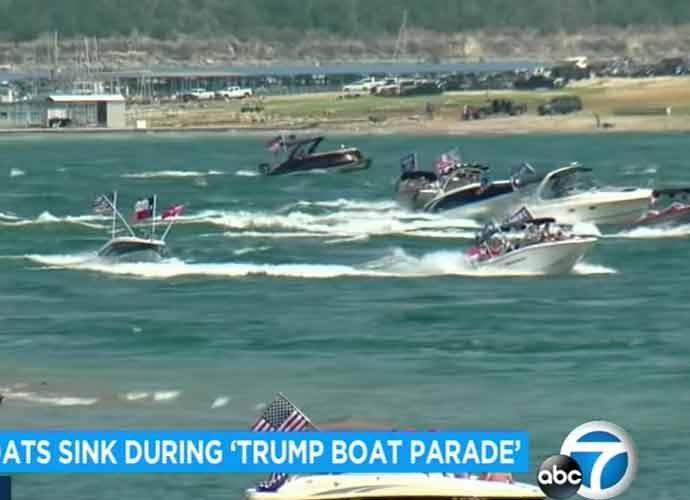 At least five boats sank on Saturday during a parade for Trump in Austin, Texas. The boats were located in Lake Travis, a 19,000-acre impoundment roughly 12 miles northwest of Austin. The event was named the Lake Travis Trump Boat Parade and was organized on Facebook, with more than 8,000 people indicating that they were interested in attending. The page encouraged participants to “Decorate your boats in patriotic colors and fly as many Trump flags as she can handle.”

The reported incident occurred around 12:00 p.m. local time on Saturday. The local sheriff department responded to multiple calls on Saturday regarding boats in distress and boats that had sunk. Although people had to be rescued from the water, there have currently been no reported fatalities or injuries. It is also unclear how many people needed rescuing, as many individuals were helped by other boaters before first responders were able to arrive. The number of total sunken boats, which authorities indicate is at least four, still remains unknown. According to dispatchers, at least three boats went down in 30 minutes, with the first being at approximately 12:10 p.m. local time.

The cause of the sinking of these boats is undetermined, although Kirsten Dark, the Travis County Sheriff’s Office correspondent, said there was no indication of an intentional act. According to Paul Yura, from the National Weather Service in Austin/San Antonio, the weather conditions at the time this event were fairly normal, with no storms in the area and very mild winds. The Facebook event also asked boaters to go no faster than 10mph and for slower vessels to remain in the back for safety reasons.

Authorities point to the choppy water and large waves, which was caused by numerous boats moving closely together, as a potential source for the sinking of the vessels.