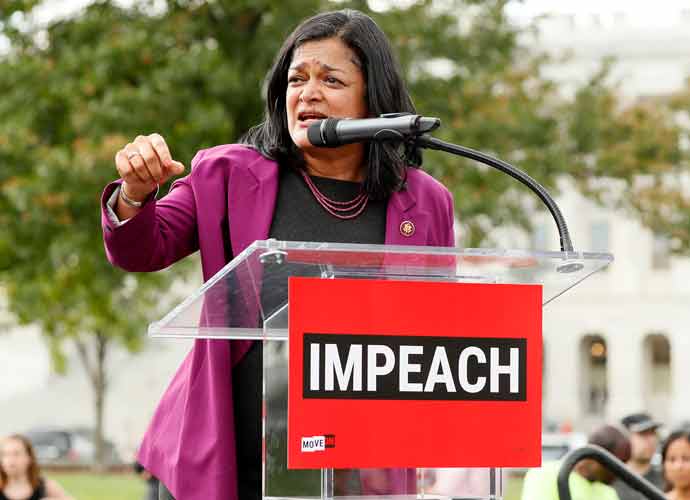 WASHINGTON, DC - SEPTEMBER 26: Rep. Pramila Jayapal (D-WA) speaks at the “Impeachment Now!” rally in support of an immediate inquiry towards articles of impeachment against U.S. President Donald Trump on the grounds of the U.S. Capital on September 26, 2019in Washington, DC. (Photo by Paul Morigi/Getty Images for MoveOn Political Action)

Rep. Pramila Jayapal (D-Washington) announced Monday night that she is among the lawmakers who have tested positive for COVID-19 in the days following the riot at the Capitol, in which politicians were forced to take shelter in a crowded area — along with some Republican colleagues who refused to wear masks.

Jayapal told The Cut that she began quarantining immediately after the events at the Capitol, believing that the secure room she had been in, “where there were over 100 people and many Republicans not wearing masks, was a superspreader event.”

Her office condemned the several Republicans who “not only cruelly refused to wear a mask but mocked colleagues and staff who offered them one.”

“Too many Republicans have refused to take this pandemic and virus seriously, and in doing so, they endanger everyone around them,” Jayapal said. “Only hours after President Trump incited a deadly assault on our Capitol, our country, and our democracy, many Republicans still refused to take the bare minimum COVID-19 precaution and simply wear a damn mask in a crowded room during a pandemic — creating a superspreader event on top of a domestic terrorist attack.”

She added in a statement that she was not experiencing any symptoms and would continue working from home while quarantining.

Jayapal also addressed a moment caught on video where she was seen without a mask with The View, explaining Capitol police had told lawmakers to remove their face masks to prepare to put on gas masks.

At least two other lawmakers have contracted COVID-19 since the Capitol riot, and all three attribute their diagnoses to last Wednesday’s events.

In an op-ed for the Washington Post, Rep. Bonnie Watson (D-New Jersey) called for the widespread wearing of masks, even though “it is occasionally annoying.”

Watson likely contracted COVID-19 during the Capitol siege. She is a cancer survivor and 75 years old, and generally considered at higher risk of developing complications from COVID-19.

“I am angry that after I spent months carefully isolating myself, a single chaotic day likely got me sick,” Watson wrote. “I am angry that several of our nation’s leaders were unwilling to deal with the small annoyance of a mask for a few hours. I am angry that the attack on the Capitol and my subsequent illness have the same cause: my Republican colleagues’ inability to accept facts.”

Watson added that she is only experiencing symptoms of a mild cold.

Rep. Brad Schneider (D-Illinois), the third lawmaker to test positive after the pro-Trump riot, similarly said he was “angry at the selfishness and arrogance of the anti-maskers, who put their own contempt and disregard of decency ahead of the health and safety of their colleagues and our staff.”

Schneider is currently asymptomatic and admits he isn’t entirely sure where he was exposed to the virus, though he has been careful in other situations.

Man Arrested After Threatening To Kill Washington Rep. Pramila Jayapal Outside Her Home