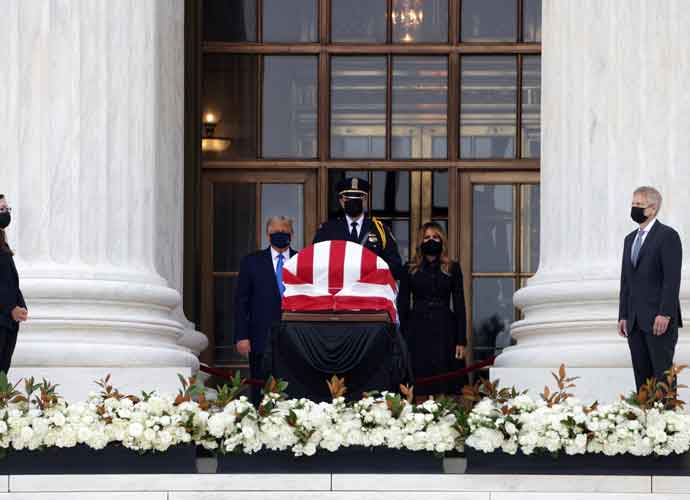 WASHINGTON, DC - SEPTEMBER 24: U.S. President Donald Trump and first lady Melania Trump pay their respects to Associate Justice Ruth Bader Ginsburg's flag-draped casket on the Lincoln catafalque on the west front of the U.S. Supreme Court September 24, 2020 in Washington, DC. A pioneering lawyer and according the Chief Justice John Roberts 'a jurist of historic stature,' Ginsburg died September 18 at the age of 87 after a long battle against cancer.

Trump Booed By Protesters While Paying Respect To Justice Ruth Bader Ginsburg: ‘Vote Him Out’

On Thursday, President Donald Trump paid respects to the late Justice Ruth Bader Ginsburg at her coffin on the steps of the Supreme Court.

As Trump stood silently, protesters yelled “vote him out” and “honor her wish” in reference to Trump nominating a conservative justice to fulfill the Supreme Court vacancy.

It was unclear whether the president and First Lady Melania Trump could hear the chanting.

When interviewed later, Trump said he could “hardly hear it.”

“Somebody said there was some chanting, but they were right next to the media. But we really could hardly hear too much. We heard a sound, but it wasn’t very strong,” he added.

She said, “The chants were appalling, but certainly to be expected when you’re in the heart of the swamp. I thought it was an appalling and disrespectful thing to do, as the president honored Justice Ginsburg.”

The president has infuriated supporters of Justice Ginsburg by indicating his wish to appoint a conservative justice to succeed Ginsburg’s position, contrary to Ginsburg’s “dying wish” that the next president appoint her successor.