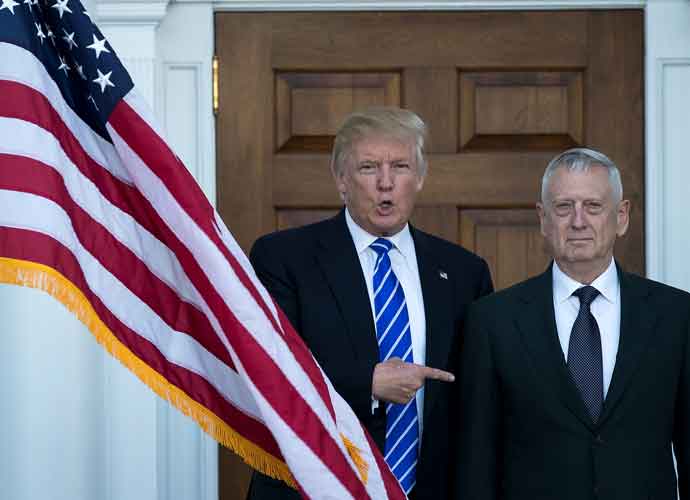 BEDMINSTER TOWNSHIP, NJ - NOVEMBER 19: (L to R) President-elect Donald Trump welcomes retired United States Marine Corps general James Mattis as they pose for a photo before their meeting at Trump International Golf Club, November 19, 2016 in Bedminster Township, New Jersey. Trump and his transition team are in the process of filling cabinet and other high level positions for the new administration.

Excerpts from Bob Woodward’s book, Rage, reveals that former Defense Secretary James Mattis told Dan Coats, former director of National Intelligence, that President Donald Trump was “has no moral compass” and that he was “dangerous” and “unfit.”

Mattis reportedly said that Trump’s foreign policy actions were showing their adversaries “how to destroy America.”

Mattis resigned from being defense secretary in December of 2018 after Trump’s plans to withdraw troops from Syria became public. In his resignation letter, he wrote that he was stepping down from his position because Trump has “the right to have a Secretary of Defense whose views are better aligned with [his] on these and other subjects,” regarding Mattis’ views on treating allies with respect. Mattis stated that “We must do everything possible to advance an international order that is most conducive to our security, prosperity and values, and we are strengthened in this effort by the solidarity of our alliances.”

In a conversation with Mattis, Coats also stated that “To [the president], a lie is not a lie. It’s just what he thinks. He doesn’t know the difference between a truth and a lie.”

Though military leadership have previously disagreed with Trump, this news strikes particularly hard after The Washington Post‘s revelations regarding Trump calling veterans and prisoners of war “losers” and “suckers.” Trump retaliated by claiming that soldiers love him, but that the military’s top brass are influenced by defense firms in wanting to continue wars.

Coats and Mattis discussed after Mattis’ resignation that “there may come a time when we have to take collective action” against Trump, likely referring to speaking out against him publicly. Ultimately, Mattis said that he resigned “when [he] was basically directed to do something that [he] thought went beyond stupid to felony stupid,” regarding Trump’s decision with Syria.