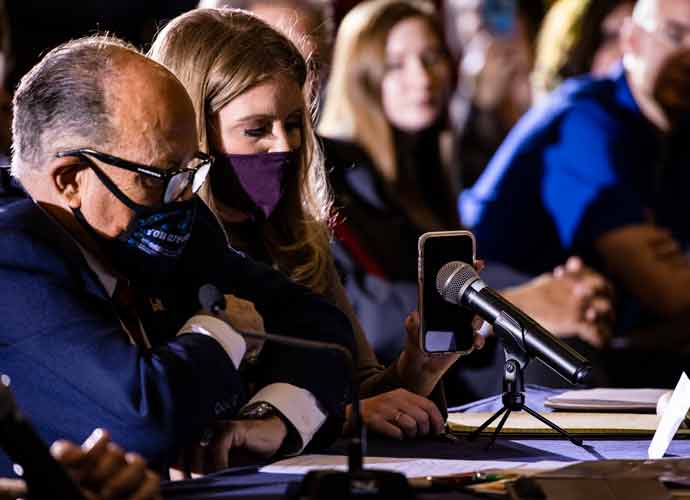 GETTYSBURG, PA - NOVEMBER 25: Jenna Ellis, a member of President Donald Trumps legal team, holds up a cell phone to the microphone so President Trump can speak during a Pennsylvania Senate Majority Policy Committee public hearing Wednesday at the Wyndham Gettysburg Hotel to discuss 2020 election issues and irregularities on November 25, 2020 in Gettysburg, Pennsylvania. Giuliani is continuing his push to overturn election results in the courts.

President Donald Trump was expected at a GOP-planned “hearing” on Wednesday in Pennsylvania regarding alleged voter fraud in the 2020 election.

Although Trump cancelled his trip due to a staff member contracting coronavirus, Trump addressed the group by speakerphone with his personal lawyer, Rudy Giuliani. This would have been the first outing made by the president outside of Washington since his election loss.

While Trump has yet to provide evidence for the voter fraud that he says lost him the election, several states have solidified President-elect Joe Biden‘s hold on the electoral college. Pennsylvania certified its results on Tuesday, and Arizona is set to on Monday. Both were battleground states that Trump lost by close margins.

The event in Pennsylvania was just two days after the General Services Administration acknowledged that Biden had won the election and allowed the formal transition to begin, despite the president still not conceding his loss.