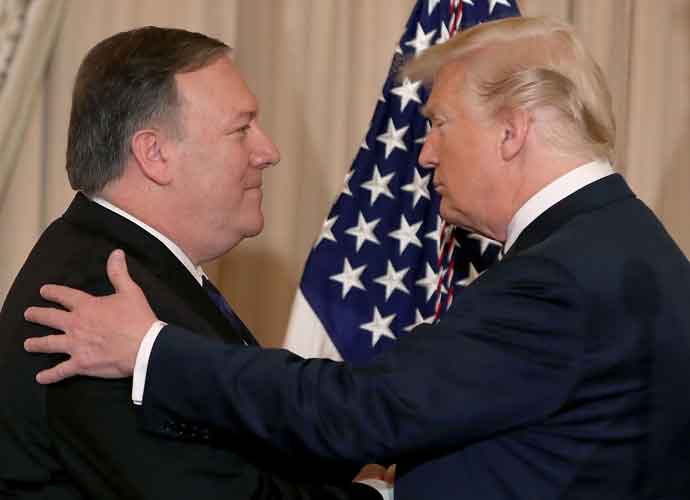 WASHINGTON, DC - MAY 02: President Donald Trump congratulates Secretary of State Mike Pompeo during a ceremonial swearing in at the State Department on May 2, 2018 in Washington, DC. Secretary Pompeo was officially sworn in on April 27th.

On Tuesday, Secretary of State Mike Pompeo said that President-elect Joe Biden was not the election winner.

“There will be a smooth transition to a second Trump administration,” Pompeo said of election loser, Donald Trump.

Pompeo reiterated the words spoken by Trump since the election – the baseless allegations that Biden won due to voter fraud and illegal activity, stating that it was important to count “every legal vote.”

“When the process is complete, there will be electors selected,” he continued. “There’s a process. the Constitution lays it out pretty clearly.”

Once the election began to tip Biden’s way, Trump went straight to Twitter to claim without evidence that the results were not legal and that the vote count needed to stop.

Trump praised Pompeo’s words on Twitter, “That’s why Mike was number one in his class at West Point!”

That’s why Mike was number one in his class at West Point! https://t.co/hldYAphqmM

When asked about Pompeo, Biden laughed and said, “Secretary of State Pompeo….” He did not further elaborate.

Biden also shared on Tuesday that world leaders had been sending their congratulations since he was declared the winner. He said that he would not be pursuing legal action against the Trump administration for not providing Biden presidential transition resources as required by law.