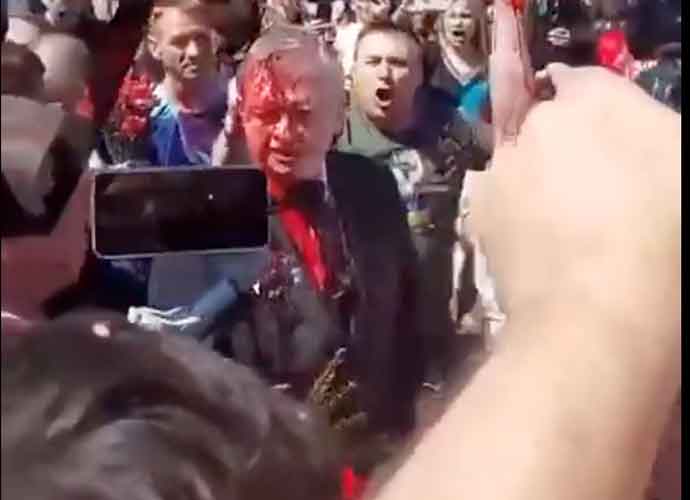 Russia’s ambassador to Poland Sergei Andreev was doused with red paint by protestors to the Russia-Ukraine War as he made an appearance at the Warsaw cemetery to honor Red Army soldiers who lost their lives fighting in World War II on Victory Day.

The holiday celebrates the Allies’ win over Nazi Germany. Protestors screamed “murderers” and “fascists,” as they snatched away and trampled the flowers Andreev was going to lay on the graves. He was hit with two bags of red paint. The first one hit him in the back, but the second one hit him directly in the face. Andreev returned to his car and left the scene safely with the help of the police.

The exact moment when Russian Ambassador Sergei Andreev was struck by red paint while trying to lay a wreath in the Soviet soldiers cemetery in #Warsaw#VictoryDay #9Mai #Putin #RussianUkrainianWar #StreetArt #Protest #Anonymous pic.twitter.com/D3u5QfCFtF

Poland’s Interior Minister Mariusz Kamiński said he had advised Andreev to stay away from the event.

“The gathering of opponents of Russian aggression against Ukraine, where the crime of genocide takes place every day, was legal,” Kaminski added in a statement posted on Twitter. “The emotions of Ukrainian women taking part in the demonstration, whose husbands are fighting bravely in defense of their homeland, are understandable.”