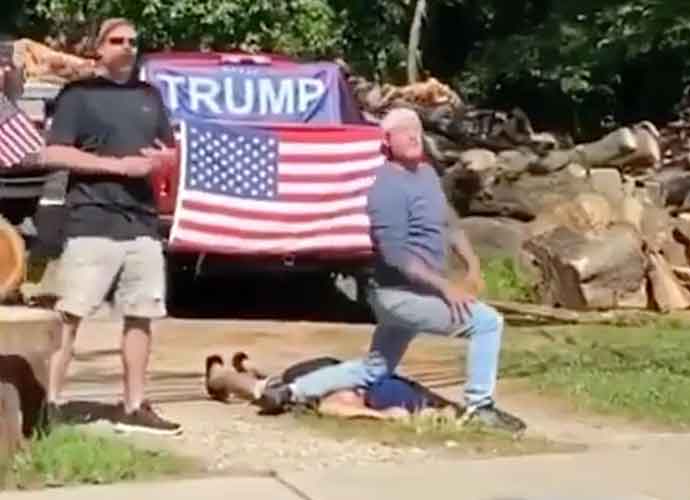 A New Jersey corrections officer was suspended Tuesday after being identified in a video of him and several other white men mocking George Floyd‘s death Monday at a Black Lives Matter protest in New Jersey.

The white counterprotesters reenacted Floyd’s death, with one man kneeling on the neck of another who lay on the ground. The men had an “All Lives Matter” sign and a Trump campaign banner.

“This is what happens when you don’t comply with the cops,” yelled the man on top, who then blamed Floyd for his own death.

Right here in South Jersey! Don’t be naive! Some Posted @withregram • @stfuml This is what James J Demarco did while my brother @russy06 was peacefully protesting in Franklinville NJ. James works for @fedex so now I want to know does this employees behavior align with your company policy? #BLM #blacklivesmatter #blackouttuesday #icantbreathe #georgefloyd #justiceforgeorgefloyd #naacp #civilrights #breonnataylor #saytheirnames #racism #racist #repost

At least two participants in the video were later identified.

“We have been made aware that one of our officers from Bayside State Prison participated in the filming of a hateful and disappointing video that mocked the killing of George Floyd,” the state Department of Corrections said in a statement.

The officer was not identified by the department but has been suspended pending an investigation.

Another counterprotester, a FedEx worker, has been fired.

The company said in a statement Tuesday evening that it does “not tolerate the kind of appalling and offensive behavior depicted in this video. The individual involved is no longer employed by FedEx. We stand with those who support justice and equality.”