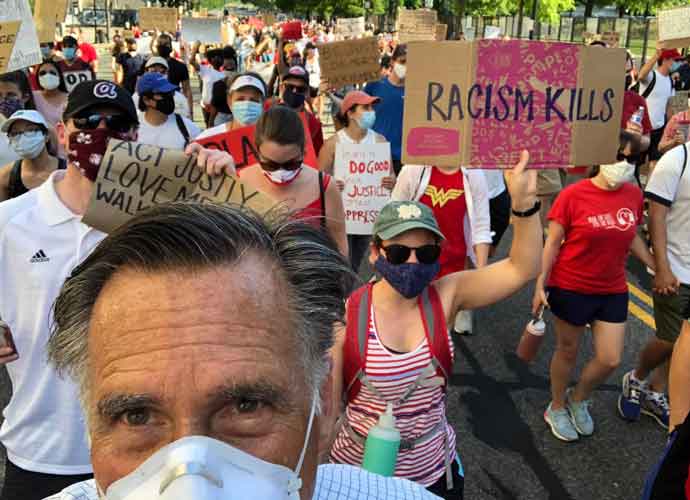 On Sunday, Sen. Mitt Romney (R-Utah) marched with George Floyd protestors outside the U.S.  Capitol in Washington, D.C., as the protests against racial police violence continue on across the United States. Romney was the first Republican elected representative to join the George Floyd demonstrators.

Romney tweeted a photo of him marching with the protesting crowd, wearing a face mask.

A Washington Post reporter Hannah Natanson also recorded Romney marching with the protestors. While marching, he said he wanted to find “a way to end violence and brutality and to make sure that people understand that black lives matter.”

.@MittRomney is marching with a group of nearly 1,000 Christians to the White House. Here he is on video saying why he’s walking: “… to make sure that people understand that Black Lives Matter” https://t.co/KCxJNchCMs pic.twitter.com/Za0Am2WL8g

On Saturday, Romney also posted a photo of his father George Romney similarly taking part in the anti-racism protests in the 1960s. Along with the photo, he added his father’s quote that expressed a view against the use of force in civil riots.

This is my father, George Romney, participating in a Civil Rights march in the Detroit suburbs during the late 1960s—“Force alone will not eliminate riots,” he said. “We must eliminate the problems from which they stem.” pic.twitter.com/SzrcAyfPD8

Romney’s response to the nationwide protests came as a contrast with President Donald Trump‘s constant calls for “law and order.” As the protests against racism continue enflaming the country after George Floyd‘s fatal arrest, Trump has threatened to use active military force on the demonstrators and criticized the local officials for the lack of toughness.

Tremendous sincerity, what a guy. Hard to believe, with this kind of political talent, his numbers would “tank” so badly in Utah! https://t.co/KqHsHmSRKo