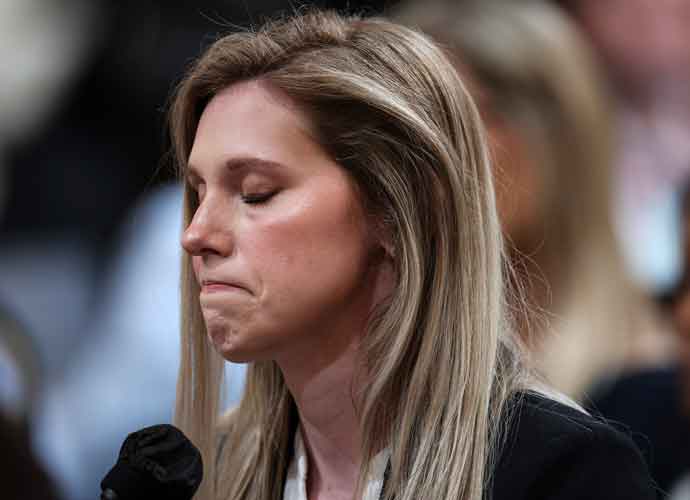 WASHINGTON, DC - JUNE 09: U.S. Capitol Police Officer Caroline Edwards, who was the first law enforcement officer injured by rioters storming the Capitol grounds on January 6, testifies during a hearing by the Select Committee to Investigate the January 6th Attack on the U.S. Capitol on June 09, 2022 in Washington, DC. The bipartisan committee, which has been gathering evidence related to the January 6 attack at the U.S. Capitol for almost a year, will present its findings in a series of televised hearings. On January 6, 2021, supporters of President Donald Trump attacked the U.S. Capitol Building during an attempt to disrupt a congressional vote to confirm the electoral college win for Joe Biden. (Photo by Win McNamee/Getty Images)

She spoke to the House select committee that has been probing the Capitol attack for the past 11 months as it held its first public hearing in prime time.

“I couldn’t believe my eyes: There were officers on the ground. They were bleeding. They were throwing up. I saw friends with blood all over their faces. I was slipping in people’s blood. I was catching people as they fell. It was carnage. It was chaos. I can’t even describe what I saw. Never in my wildest dreams did I think that as a police officer, as a law enforcement officer, I would find myself in the middle of a battle,” she recounted.

"It was carnage. It was chaos," Capitol Police Officer Caroline Edwards said of the Jan. 6 attack during the House panel’s first public hearing on Thursday. https://t.co/4qalA5SVtW pic.twitter.com/T724Asza6v

Edwards blacked out from a bad concussion and suffered from fainting spells in the months following.

She said that the violence she and her fellow officers experienced that day was something they had never trained for.

“I was called a lot of things on January 6, 2021, and the days thereafter,” Edwards said. “I was called Nancy Pelosi’s dog, called incompetent, called a hero and a villain. I was called a traitor to my country, my home and my Constitution. In actuality, I was none of those things.”

“I was an American standing face-to-face with other Americans asking myself how many time – many, many times – how we had gotten here. I had been called names before, but never had my patriotism or duty been called into question,” she added.