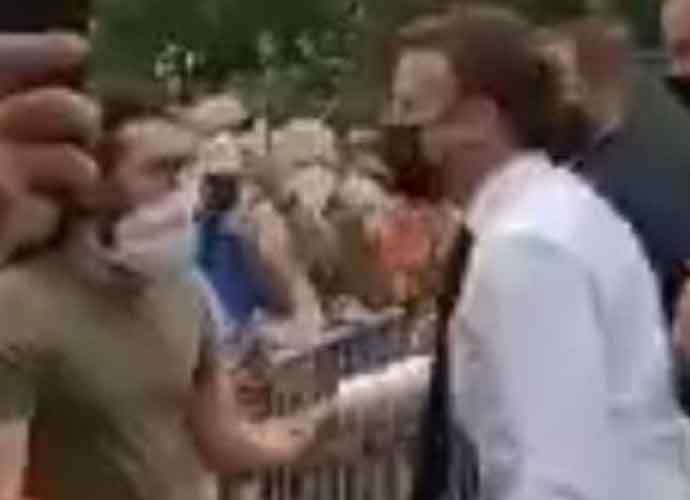 President Emmanuel Macron was greeted with a slap across the face while meeting with his supporters who were waiting for the president after his tour of a high school in southeast France.

Two men have been arrested in connection with the crime. The first, the perpetrator, has been identified as Damien T., a man with interests in the Japanese martial art of kendo, and historical Medieval martial arts, which he teaches, the world of medieval fantasy and the Middle Ages.

He shouted, “Montjoie! Saint Denis! A bas la Macronie! “(Montjoie! Saint Denis! Down with Macronland)” while slapping the president. The cry was first heard in the 12th-century under Louis VI of France and allegedly refers to late-8th century King of the Franks, Lombards, and Emperor of the Carolingian Empire, Charlemagne. The cry is referring to Charlamagne’s banner, Oriflamme also called the “Montjoie”, which was kept at the Abbey of Saint-Denis. Louis VI was the first royal banner bearer and popularised the cry.

On social media, Damien notably follows royalist accounts and far-right influencers. Le Parisien reports that “many role-playing books, combat simulations, works on the Middle Ages and even a Soviet flag” were also found in the home of the second suspect.

The other man, Arthur C., had a gun in his home, owned legally, and a copy of Mien Kampf.

No concrete reason has been given for the slap. A source close to the case has called Damien’s beliefs an “ideological mush.”