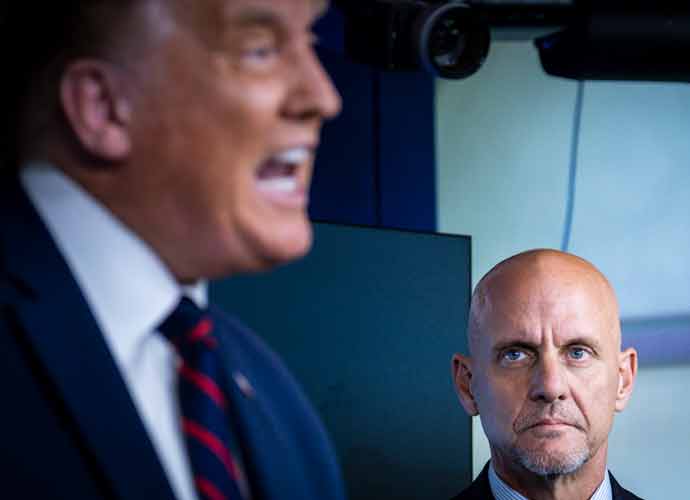 WASHINGTON, DC - AUGUST 23: FDA Commissioner Stephen Hahn looks on as President Donald Trump announces that the Food and Drug Administration is issuing an emergency authorization for blood plasma as a coronavirus treatment during a press conference in James S. Brady Briefing Room at the White House on on August 23, 2020 in Washington, DC.

Stephen Hahn, the Food and Drug Administration Commissioner, apologized Monday and issued a mea culpa for overstating the benefits of convalescent plasma in treating COVID-19.

“I have been criticized for remarks I made Sunday night about the benefits of convalescent plasma. The criticism is entirely justified,” Hahn wrote on Twitter, referring to comments he made at a news conference last Sunday with President Donald Trump. “What I should have said better is that the data show a relative risk reduction not an absolute risk reduction.”

The White House made a “historic announcement” Sunday that the FDA would grant an emergency use authorization for the treatment, which is widely considered a safe practice.

However, few controlled studies show its effectiveness in treating the virus.

The FDA’s decision was based on anecdotal evidence from a 70,000-person program run by the Mayo Clinic. While the program showed promise, it was not a controlled study and lacked a control group – the only way to ensure that the treatment is actually working.

Hahn said of the Mayo Clinic program on Sunday: “if you are one of those 35 out of 100 people who these data suggest survive as a result of it, this is pretty significant.” How he reached those numbers is unclear.

In a tweet Monday, Hahn clarified that no randomized trials for convalescent plasma are available yet.

When asked if he had faced political pressure from the administration to issue the emergency use authorization, Hahn told CNN in a statement that he “took an oath as a doctor 35 years ago to do no harm.”

“I’ve never been asked to make any decision at the FDA based on politics,” he said. “The decisions the scientists at the FDA are making are done on data only.”