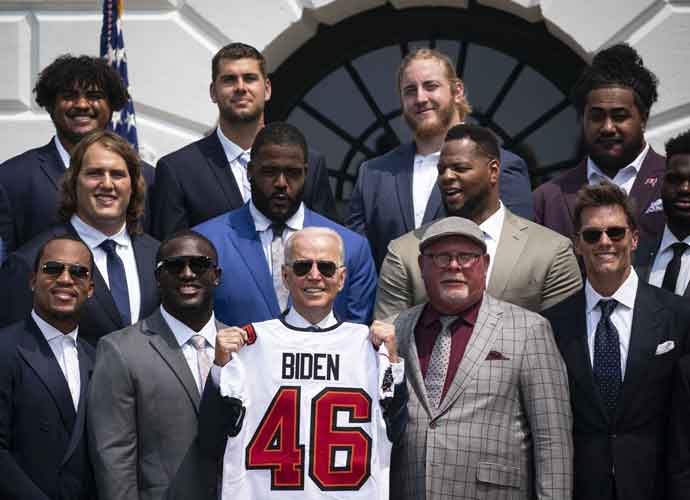 U.S. President Joe Biden, center, holds up a football jersey during a ceremony for the Tampa Bay Buccaneers on the South Lawn of the White House in Washington, D.C., U.S., on Tuesday, July 20, 2021. The Buccaneers defeated the Kansas City Chiefs 31-9 at Super Bowl LV in Tampa, Florida, on February 7. Photographer: Al Drago/Bloomberg via Getty Images

It is traditional for the Super Bowl champions to visit the White House after a win.

Biden’s predecessor, former President Donald Trump, had created some drama for the league with past visits.

The last time that the NFL champion was invited to the White House was in 2017. In 2018, the Philadelphia Eagles, which was the Super Bowl champion that year, were not invited by Trump, who complained about the players taking a knee during the National Anthem, calling them “disrespectful.”

Since then, the Super Bowl champions have not attended the traditional White House event.

The New England Patriots, the 2019 Super Bowl champion, did not accept the invitation from the White House, though both parties denied that it had anything to do with their political tension.

In 2020, Trump sent congratulatory remarks to Kansas City for their Super Bowl victory. The champions did not attend the White House celebration due to COVID-19.

The Tuesday’s ceremony also indicates the White House’s confidence in reopening traditional events and ceremonies that were mostly halted last year due to the pandemic.

Earlier in July, Biden has also invited the Los Angeles Dodgers, the World Series Champion of 2020, to the White House. The champion also presented Biden and Vice President Kamala Harris with its team uniforms.